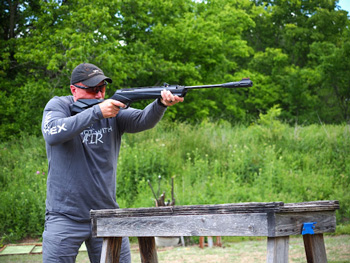 Simplicity reigns supreme. Yep, in this ever more complicated world we live in, simplicity is still a desirable characteristic for products to have. If not a simple device, a simple interface will suffice, but at the end of the day, the simple tool has fewer failure points and will stand to do its job another day. Using the venerable hammer (the tool, not the PCP air rifle) as an example, contractors rarely actually frame out a house with 16 penny nails and 24 oz framing hammers anymore, but when the pneumatic hammer and rolls of nails run out, you can better believe that the tool belt will be filled with regular old nails and a regular old hammer in the carpenter’s hand.

Occam’s Razor and Two Is One

The same can be said regarding air rifles. Not everyone wants or needs a PCP, but even if they do have one, a “fly in the ointment” can shut the whole operation down. If you are confident that the failure could be repaired easily and don’t mind the wait, more power to you. But if you are like me and subscribe to the “two is one, and one is none” theory on tools, then at least one of those tools needs to be robust and dependable-- capable of off-the-grid use in a worst-case scenario.

This is why, regardless of how cool and popular PCPs have become, I will still always have a spring-powered air rifle in .22 caliber like the new Surgemax Elite in the gun safe. Yes, even a guy who has access to multiple fill methods still wants to keep a “low-tech” spring-style air rifle in play. But remember what I said about simple user interface? Just because the Surgemax Elite has a simple interface doesn’t mean that it is full of stone-age technology. Far from it. The Surgemax Elite is a gas-piston-powered rifle. It uses Umarex’s tried and true T.N.T gas piston to generate plenty of power to motivate common .22 caliber pellets fast enough to be a serious small game harvesting tool.

The Surgemax Elite .22 is Loaded with Features 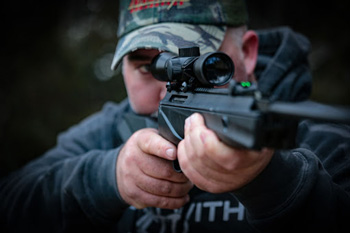 The .22 caliber offering means that the pellets are naturally going to fly below the speed of sound which results in quiet shooting. To further reduce the noise, Umarex equipped the Surgemax Elite with their SilencAir muzzle device. The piston noise and target impact will likely be louder than the sound generated by the pellet itself. While this simple break barrel rifle is topped off with a generous section of Picatinny rail, it is still equipped with fiber-optic front and rear “iron” sights. Redundancy? Yes. Redundancy is a good thing when it comes to sights.

The Surgemax Elite in .22 features an all-weather polymer stock that both keeps the weight down and makes the rifle very ergonomically satisfying.

If a shooter wants to use a sling on the rifle, this can easily be done using a loop-style sling on the barrel end. The stock has a slot for sling attachment built-in. A 4X32 scope is included with the rifle. This level of magnification is just about perfect for small game hunting ranges. Targets can be easily attained with this magnification level as it fits into a “Goldilocks” category-- not too little, not too much magnification-- just right.

It doesn’t take too much imagination to realize how important having a relatively quiet small game rifle is in this time. Ammo, both centerfire, and rimfire are still hard to get and expensive when it is found. I have just nearly stopped shooting my rifles and rimfire guns as a result. While the availability issue has somewhat become less of an issue, the price is still much steeper than what it was a year and a half ago. Pellets are also in high demand and prices have increased as a result of the demand, but 1,000 rounds of .22 caliber pellets are still far cheaper than 1,000 rounds of .22LR ammunition. Not only that, there are no hazmat shipping charges tacked on to an order of pellets. Pellets are usually sold in a round tin holding between 200 and 500 pellets each. A tin holding 500 pellets can easily slip into a jacket pocket and a 200 count tin will fit just about anywhere. Even the diminutive .22 LR can’t brag to that level of portability. 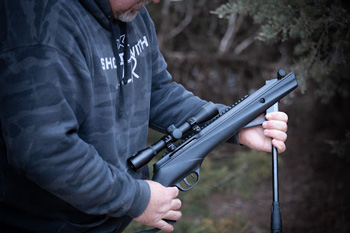 Gas-pistons are smoother shooting than the older spring-powered airguns. While the fore and aft shock is still present, much of the vibration is minimized by the smooth action of the gas piston.

One rifle and one tin of pellets can go a long way towards making a compact and efficient shooting solution for when times become perilous. And even though firearm ammo availability has eased somewhat, we all know how fast the shelves will be emptied with the slightest blip of ill news. Do you have a good airgun in your gun cabinet? If you don’t have one, look at this affordable option to hedge your bets against forthcoming adversity.