The Industrial Revolution has brought untold wonders to people all over the globe. Once the pathway to mechanization opened up, the race of development and advancement was brought to a feverish pace. A tool or machine developed just a few years before was obsolete today. This continued and still continues to this post-modern age. The unstoppable ambition represented by the idea of Manifest Destiny proudly resided in the United States, and, with no coincidence whatsoever, much of the development, technology, and ideas of the Industrial Revolution were born right here.

The Children of Manifest Destiny and Their Tools

The ambition and drive of 19th century gunsmiths and businessmen like Samuel Colt, John Moses Browning, Horace Smith, Daniel Wesson, and Oliver Winchester took firearm development from the rudimentary smoothbore flintlock musket to the repeating self-contained metallic cartridge firing rifle in the span of only 20 years. In particular, the original Henry rifle whose design was acquired by the Winchester Repeating Arms Company and improved by JM Browning, no less, became the rifle that was sought after by lawmen and outlaws alike—and many other customers in between those two extremes.

The lever action design, while not ideal for military purposes was (unless you are on a horse) very convenient for the Western adventurer because it allowed a common round to be used between the pistol and the rifle. It also offered “high” capacity and lightning-fast follow-up shots. Later iterations of the lever action design made accommodations for the new “smokeless” powders and harder hitting rifle loads like the .30 Winchester Smokeless-- better known and still popular today as the .30-30 Winchester. 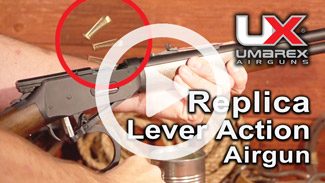 The lever action was and is a hit with shooters the world over. The technology for this design may have plateaued 80 years ago, but the love of lever guns is still strong today. Why? Maybe because while gun technology has led to the creation of modern “Franken-guns” and rifle platforms capable of delivering phenomenal accuracy out to hundreds if not thousands of yards, the mechanical beauty and (seeming) simplicity of the lever action hearkens people back to a time when things were made by hand, made to last, and made to please the eye.

Back to the Future?

Whatever the reason, the lever action is something that resonates with shooters all over the world. We at Umarex have had a lever action pellet rifle in our catalog for years now, the Walther Lever Action. This is, no doubt, a fantastic, extremely well-made replica, but it does leave a little to be desired in realistic function. It doesn’t cycle each shot from a shell casing. The Legends Cowboy Rifle changes that. To be sure, it doesn’t replace the Walther Lever Action—that rifle has its dedicated fans, but it does complement several of our other offerings exceptionally well.

The Cowboy Rifle is a part of our Legends line. The Legends products are our homage to iconic designs from the past. Whether a war-time replica, or, in this case, a tribute to the guns of the Old West, we wanted to create an accessible, honest, and realistic replica that would please fans and history buffs alike.

We can’t be more proud of how this rifle turned out. The Cowboy Rifle’s esthetics are spot on. Every element of the design was carried over to our airgun replica. This is a tough task, to be sure. In a firearm, the extractor and ejector mechanism is dealing with a spent case—a case that weighs much less than it did before it was fired. Our BB shell only loses about 5.2 grains after the shot. For argument's sake, it weighs the same going in as it does going out. You can image the engineering challenge this was to overcome—in an airgun. But function was a prime concern for this rifle. We made it happen.

The Cowboy Rifle’s “wood” will fool anyone. It’s not till you actually pick the rifle up and hold it, and even then, it might not sink in, that the furniture of the rifle is faux wood. It looks amazing. It even feels amazing. The Cowboy Rifle not only acts the part, but it looks the part, too.

But is it fun? In the airgun world, this is an important question. The answer is a resounding YES! This is an absolute joy to shoot and makes the perfect companion to one of our Colt Peacemaker revolvers or the steampunk themed Legends Ace in the Hole revolver. But don’t take our word for it, the internet has plenty of videos on this little jewel. Not to mention that the Legends Cowboy Rifle was just honored with a 97% Gold rating from Hard Air Magazine. 97 is the highest score they’ve ever given to a rifle.

Just gonna let that resonate for a minute.

You get that we are just a little bit proud of that? We are! If you haven’t already attained a Cowboy Rifle for yourself, entertain the chance and know you have Stephen Archer’s blessing!

When you sign-up for the Umarex Airguns newsletter, you get these benefits: